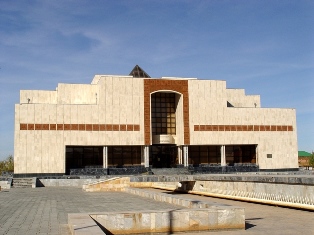 Karakalpakistan, being a part of Uzbekistan, is an autonomous republic. Its territory for the most part encompasses Usturt plateau, Kyzylkum Desert and the Aral Sea and it has a rich history and culture manifested by many interesting monuments.Ancient settlements of Karakalpakistan date back to the Stone Age. In the 6th-7th centuries B.C. there existed an ancient state of Khorezm in the lower reaches of the Amydarya River. In three kilometers from the former capital of Karakalpakistan - City of Khodjeyli - there is a unique historical and archeological ensemble Mizdakhan, located on three hills. On one of them the scientists discovered the site of ancient settlement called Ghyaur-kala. The settlement was formed in the 4th century B.C. and later in the 13th century it was destroyed by the Mongol-Tatar tribes. Many Zoroastrian sepulchers have been preserved in the eastern part of Mizdakhan. The city was a big trade and handicraft center of Khorezmian state; one of the northern branches of the Silk Road crossed the city. Many findings can attest to this fact: the remains of fabric made of golden threads with images of birds, cowry from the Indian Ocean, coral beads.Not far from Mizdakhan there is one of the most ancient well-preserved Zoroaster places for worshipping - Chilpak According to
the latest research it was in ancient Khorezm that the doctrine of Zoroastrianism was initiated and its religious teacher Zoroaster wrote the original holy book "Avesta".Among numerous historical monuments such as Kirk Kyz, Ayaz-kala, Ishan-kala mausoleum located in Ellikallin region of Karakalpakistan, ancient settlement of Toprak-kala deserves a special attention. In the 2nd - 4th centuries Toprak-kala was the mansion-house of Khoresmian governors. 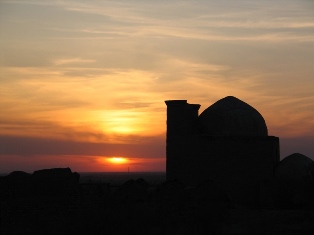 During the excavation works there were found remarkable palace constructions, halls with mural paintings and clay sculptures representing the local rulers, dark-skinned warriors, dancing figures in masks.Throughout the history of ancient Khorezm, right up to its annexation to Khiva khanate in the 16th century, the caravans had been traveling along the roads of the state from the Orient to the Occident. The evidence to this is represented by caravan-sarays, wells and other water conduit constructions found by the archeologists on the Usturt plateau along the routes of the Silk Road.The capital of Karakalpakistan - the city of Nukus - is a beautiful modern city, the center of economical and cultural life of the republic. The first records about the city are dated from the second half of the 19th century. At that period of time it was a village made up by rows of yurtas (nomad's tents) surrounded by high clay fence. Armin Vamberi, the scientist from Hungary, who traveled through the country in 1883, in his accounts of the trip mentioned Nukus fortress located on the Amudarya bank. In 1932 Nukus achieved the status of a city, while in 1939 it was proclaimed the capital of Karakalpakistan. Today, in spite of the fact that the sands of Kyzylkum desert approach closely the city walls, the streets and avenues of Nukus are buried in verdure, the squares are decorated with flowerbeds.Everyone who visits Nukus will certainly call at the Art Museum, named after its founder and first director Igor Savitskiy. As a student of Moscow Art Institute, Mr. Savitskiy  was evacuated to Central Asia at the time of World War II. 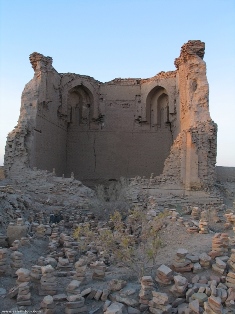 Here he took great interest in archeology, ethnography and ancient culture of the region and this passion of his made him stay here forever. He learnt about wonderful world of Karakalpaki folk art in which, as he believed, the implicit magic knowledge of the nation was hidden.In the museum there are exhibited the works of ancient and medieval art of peoples inhabiting this region, as well as the articles testifying to the trade and cultural links of the Khorezmians with The Orient and the Occident. The most ancient exhibits of the Museum are Zoroastrian terracotta statuettes of the goddess of fertility - Anakhita, mausoleum-like ossuarys (the vessels with the mortal remains of the dead ancestors, who were fire-worshippers), decorated with the images of lions, images of male and female heads. The period of late Antiquity of the 1st - 4th centuries B.C. is represented by a bronze pin in the form of a hand holding an apple, a silver finger-ring with a sard signet depicting a dolphin, a terracotta statuette of a woman holding a grapevine. Bronze lamps and a rich collection of pottery (khums for storing grain, jugs with relief decoration) date back to the 12th - 13th centuries.The displayed works of applied art of Karakalpakistan date from the second half of the 19th - first half of the 20th centuries. These works are represented by articles made from wood and leather which were widely used by the nomads during their military campaigns - saddles decorated with silver, containers for dishware, mortars for tobacco, carved doors for yurta. Of a special interest are the carpets, which were widely used by the Karakalkaks for decoration of their yurtas. These are patterned carpet strips "beldeu" and "ak-bastur", which were manufactured according to the unique techniques of relief pile fabric weaving. There are also exhibited many national costumes, small tea-sacks, wedding headdress "saukkele", all embroidered with silk, pearls and beads by the anonymous craftswomen. 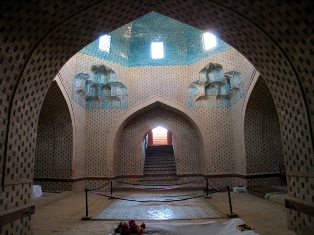 And the luxurious collection of ancient Karakalpaki jewelry, made of silver with inlays of turquoise and sard, will undoubtedly take everybody's breath away.The collection of Russian avan-guarde paintings of the 20's - 40's of the 20th century, which is the second one of such type in the world after the collection of Russian Museum in St.Petersburg, brought fame to the Nukus Museum. "Many artists, whose works are exhibited in the halls of the museum, are well known in Europe, - says the director of the museum Marinika Babanazarova, - Robert Falk, Clement Redko, Lyubov Popova, sculptors Vera Mukhina and Sara Lebedeva got their artistic education in the art studios of Paris and Munich; their names are included into the catalogues of Paris exhibitions of the early 20th century".In the exposition of the museum there are displayed real masterpieces of painter Volkov A. and a subtle master of style Usto Mumin (Nickolayev A.), famous impressionists who lived in Uzbekistan, such as Benkov P. and Kovalevskaya Z., early works of Natsykbayev U. and Karakhan N. whose style and perception were very close to avan-guarde trends, splendid canvases of Rozhdestvenckiy V., Korovay E, Kurzina M., Shevchenko N. The works of Russian artists of the early 20th century Kusnetzov P., Kuprin A. and Ulianov N. are the gems of the collection of paintings.A big role in the popularization of the museum collection was played by the society "Friends of Nukus Museum", whose members are the diplomats and representatives of various international organizations accredited in Uzbekistan. The public of the world could be introduced to some masterpieces from the museum's collection at the exhibitions, which some time ago were held in Germany, France and Italy. The world's leading experts on fine arts designated the Nukus Museum as "a desert museum" phenomenon. But it is only in Karakalpakistan that you can familiarize yourself with the complete collection of the Nukus Museum, which is included into many prestigious international directories, as its collection numbers 84 thousand exhibits.