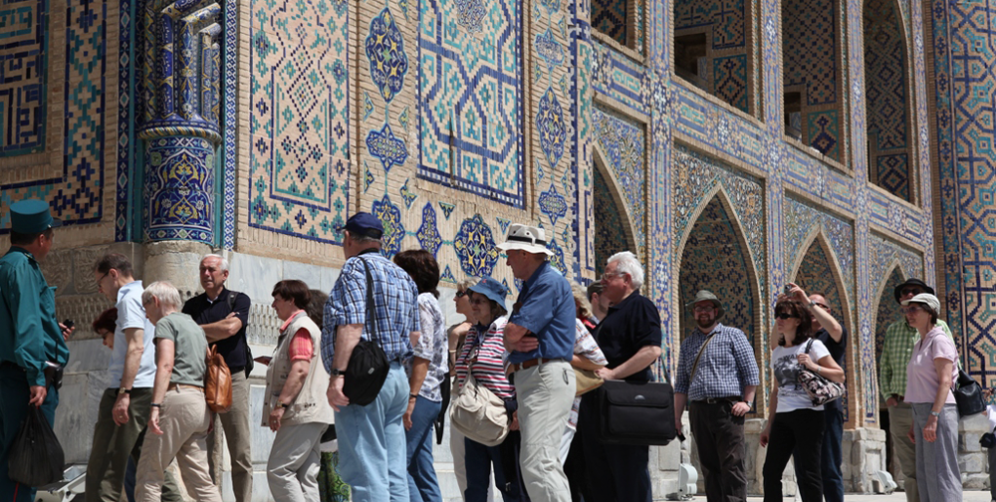 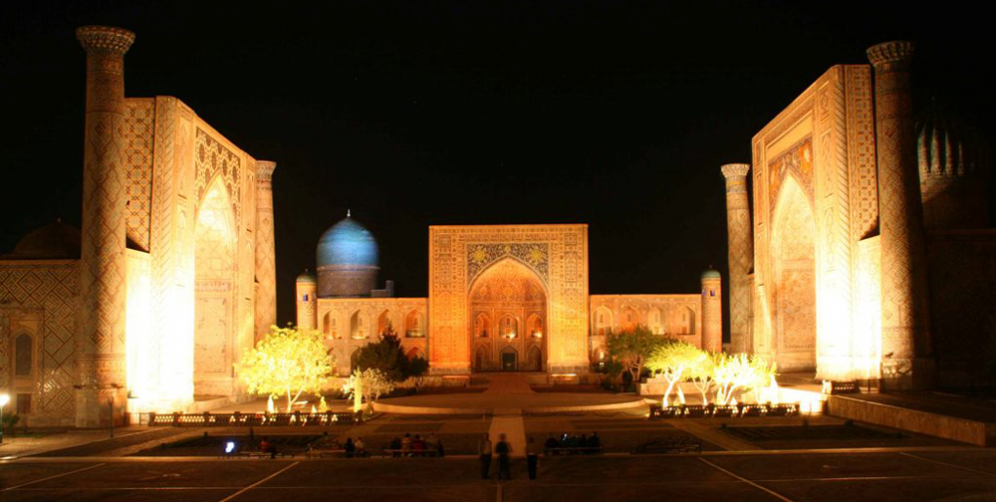 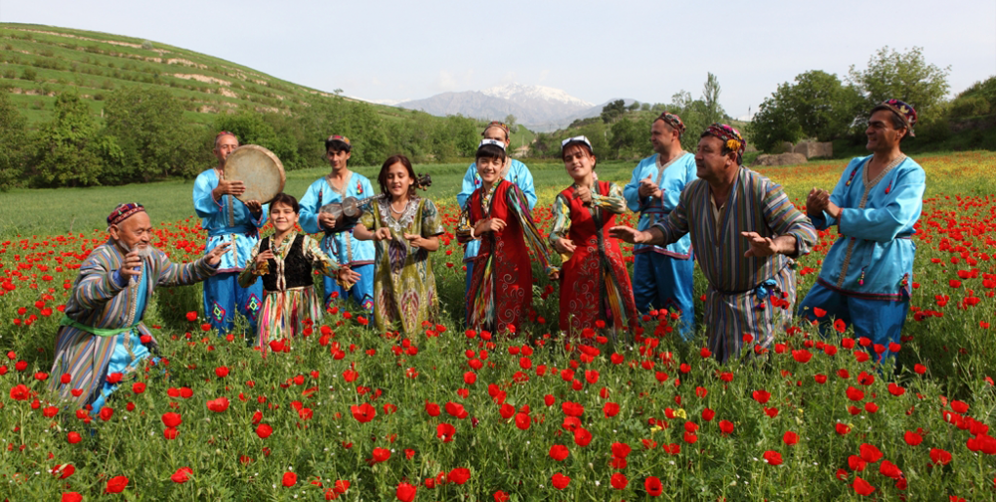 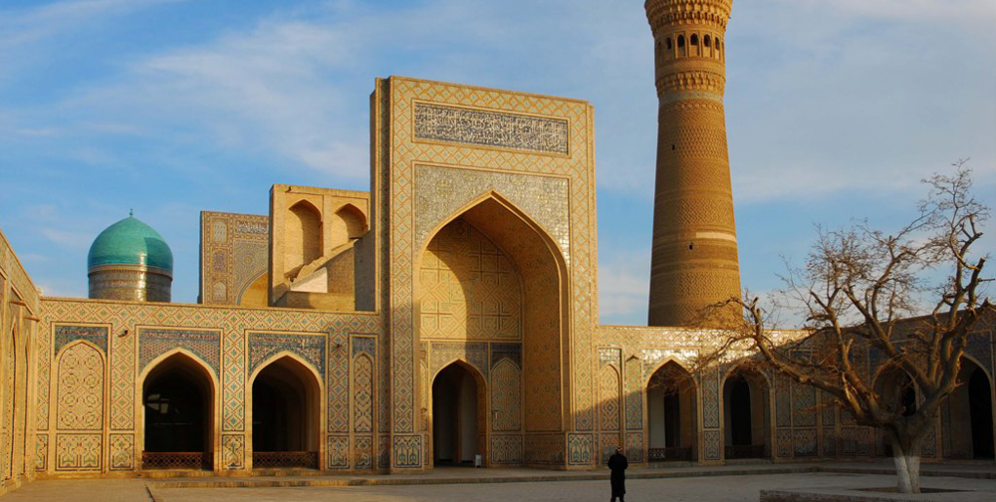 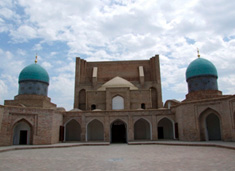 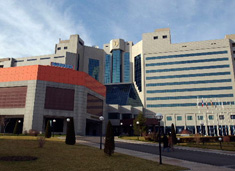 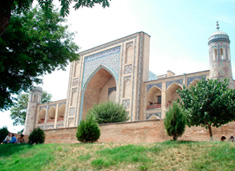 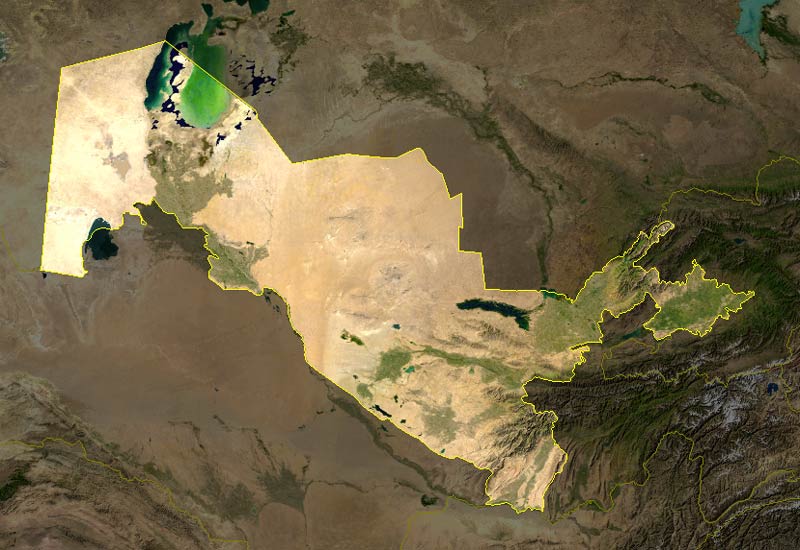 Today Uzbekistan with its numerous ancient monuments, rich nature, and the present-day rapid progress attracts the whole world's attention. For centuries the country was at the intersection of the Great Silk Road routes along which merchants, geographers, missionaries, and later tourists traveled. It is striking how the history, traditions and cultures of the nationalities populating the present-day Uzbekistan have been entangled with the history of Great Silk Road. 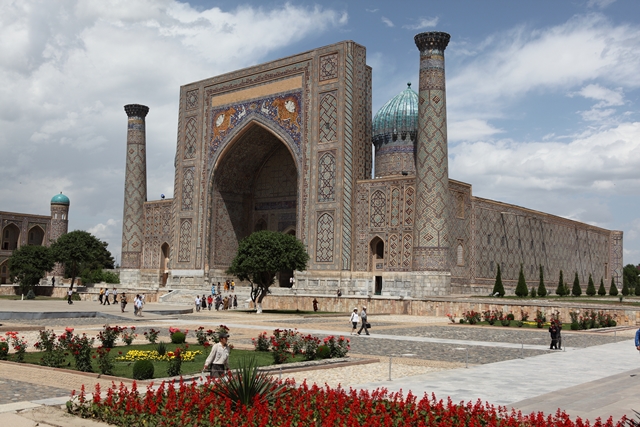 Samarkand, Bukhara, Khiva, and Shakhrizabs, where cultural and spiritual values had been long since concentrated, outstanding scientific centers and schools were established, architecture, craftsmanship, and applied art were flourishing, played the role of main urban centres. Creative work and various scientific achievements of the local scientists, thinkers, and poets have proved to be a valuable contribution to the development of the world civilization. Abu Ali ibn Sino, al-Khorezmiy, Mirzo Ulugbek, Bakhouddin Nakshband, al-Bukhoriy, at-Termeziy, Abu Raikhon Beruniy, Alisher Navoiy - this is but a short list of names of prominent figures of Uzbekistan.

Uzbekistan, where monuments of ancient cultures of different ages are concentrated, is rightly called a treasury of history. Ichan-Kala complex in Khiva, historical centers of Bukhara, Shakhrizabs and Samarkand are included in the UNESCO World Heritage list. Many unique monuments and architectural constructions in these towns have remained in a good state up to the present day and are of a great significance to the mankind.

The monuments of Samarkand are majestic and wonderful. In this town one can feel the breath of history itself. It can be traced in the ancient ruins as well as in the medrassahs, mausoleums, and minarets, which have been decorating the city until now. In 1370 Amir Timur (Tamerlan) designated Samarkand as the capital of his great state that spread from Mongolia and Siberia to Syria and India. From his campaigns he brought many skillful architects and craftsmen whose works of art have outlasted the ages. The legendary Samarkand square of Registan has up to now been considered to be one of the main architectural sights of Central Asia.

Since old times Bukhara was the center of a densely populated oasis. Archeologists noted that the city was constantly growing, both in width and in height. Ruins of dwellings, public buildings, defense structures dating back to different periods of the city's history were found in the earth stratum at the depth of 20 meters. There are more than 140 monuments of ancient architecture in Bukhara altogether. Minaret Kalyan, the striking symbol of the city, towers over it. Everyone who has seen "Great Minaret" built in 1127 will long keep in memory the impression of its greatness and original beauty.

Having once visited Bukhara, you will long stay under impression both of Ark fortress and many other monuments of antiquity, which surround you almost everywhere. Craftsmen-chasers will reproduce ancient patterns on copper and silver right before your eyes, jewellers will make replicas of unique adornments, which the beauties used to wear thousands of years ago. Involuntarily you ask yourself: how many centuries has this town numbered? How many pieces of the past material cultures are buried in it? 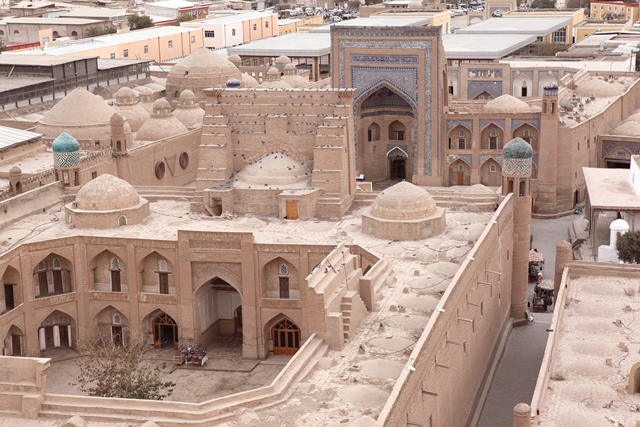 Khiva is the only town of the period of the Great Silk Road, which has remained fully undamaged till now. Time seems to go centuries back here. That is why the town has rightly gained fame of "the museum in the open". In Khiva with its narrow alleys where legends of old times seem to have been reflected in stone and wood, you can easily imagine the life of former generations which will not repeat itself but has left us old traditions, legends, and precepts.

Most of architectural monuments of Ichan-Kala complex in Khiva date back to the late 18th - first half of the 19th centuries. But the excavations on its territory revealed much more ancient layers dating back to the 3rd and even earlier centuries B.C. Ichan-Kala is surrounded by a thick wall which is 2100 meters long and has several gates. The silhouette of the huge Islam-Khodzha minaret stands out over the town.

Shakhrizyabs is the birthplace of Amir Temur where everything, one way or another, is connected with his name. Having established the Movarrounnakhr empire, having become an absolute ruler - emir, Timur designatied Samarkand as his capital. But he always remembered and took care of his hometown. In fact, Shakhrizabs was the second capital of the empire. Many beautiful constructions appeared here in the times the Timurids. Best architects, construction workers, masters of architectural decoration were sent here by the emir's orders. Alongside with the local masters they built majestic constructions thus realizing the experience and traditions of different countries.

Ancient monuments on the territory of the present-day Uzbeksitan are put on the list of the values of the world civilization. These monuments situated along the Great Silk Road traditionally attract attention of the general public: both specialists who study the Orient and international relations of the ancient world and ordinary people who seek after knowledge of the unknown world.

Tashkent, the capital of the present-day Uzbekistan, is one of the biggest cities of Central Asia and is called "Star of the Orient" and "Messenger of Peace". These names amazingly reflect the very essence of the city, which for more than 20 centuries has been symbolically illuminating with the light of peace and kindness the lives of both its inhabitants and the road for travelers.

Tashkent is rich in archeological monuments. None of Central Asian towns has been studied so thoroughly by scientists as the capital of Uzbekistan. Only ten years ago there were 39 known archeological monuments on the territory of the city, whereas today there have been excavated more than 240 monuments. In the past Tashkent had different names: Yuni, Chach, Shash, Binkent. Its present name was first introduced in the 11th century works by Beruniy and Makhmud Kashgariy.

The architectural look of old Tashkent has been developing for centuries, both under the influence of many-sided Oriental culture and due to natural factors. The urge for the ways to protection from hot climate and earthquakes gave rise to peculiar know-hows in construction. There appeared interesting types of dwellings with covered yards, sliding shutters "keshgarcha". Residential areas with a maze of narrow alleys formed the environment for standing out mosques, madrassahs, and mazars (cemeteries). 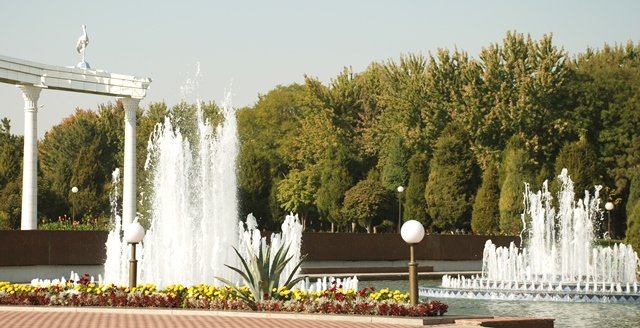 Today Tashkent is a large industrial center with about 300 companies producing almost everything which contemporary person needs: from aircraft and tractors to TV sets and toys for children. Here the images of old times join the modern skyscrapers made of glass and metal, multilevel overbridges, parks, museums, fountains. Tashkent is rapidly becoming a modern developed international megapolis.

Many-sidedness of the history of Uzbekistan is brightly reflected in its geographical location. Termez, located in the very south of the country can serve a good example of this. It came into being at the end of 19th century and had the appearance of a typical semi- Asian semi-European town. It was a one-storied town, with public buildings made of baked bricks and dwellings made of adobe, with flat roofs in Oriental style and windows facing the street in Western mode, in greenery of gardens, with customary acacias, elms and planes along the pavements. Today Termez is a modern town, the center of Surkhandarya Viloyat (Province).

Many years of scientific study have revealed that this peaceful and quiet town has a long and eventful history. It was in Surkhandarya region that the most famous Central Asian sites of primitive man were found. The territory of Surkhandarya region was a part of many states: the empire of Alexander the Great, Bactria, the empire of Chenghiz-Khan and Amir Temur, sharing with each its fate. Archeologists use to find the unique traces of their might and power. Founded on the right bank of the Jeyhun River (the Amudrya River) at a convenient crossing place, at a crossroads of caravan routes of the Great Silk Road, 5 km north-west from the present-day Termez, Old Termez had in centuries time become one of the leading towns. Later it was destroyed by hostile raids and internal wars.

The name "Pearl of Central Asia" has been positively attributed to rich and picturesque Fergana Valley, which always played a significant role in the history and culture of Central Asia. Fergana Valley is truly a unique part of the Orient. In ancient times the valley was the center of various civilizations, which is proved by evidence of antic settlements and monuments of the Middle Ages.

Today Fergana Valley is the most flourishing region of the country. The astonishing nature enchants with a variety of colors. The Sirdarya River, formed by the Karadarya and the Naryn River, flows along the northern border of the valley. These rivers feed main canals: the Big Canal, the Northern Canal and Southern Canal, which appeared on the map of the region as a result of national construction projects of the 20th century. 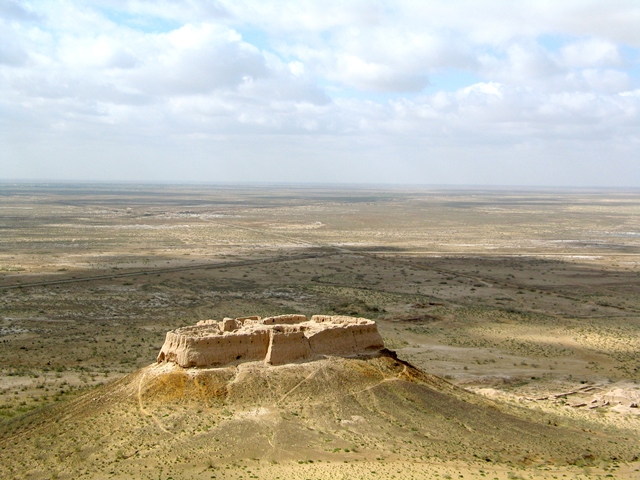 Fergana Valley, the big and flourishing oasis with the most fertile land in Central Asia, where the towns of Fergana, Kokand, Andizhan, Namangan are situated, is rightly called "Golden Valley".

Uzbekistan comprises an autonomous republic Karakalpakstan most part of which is the territory of the Kizyl-Kum desert, plateau Usturt, the delta of the Amudarya River and the southern part of the Aral Sea. The most ancient settlements here date back to the Stone Age.

The Karakalpaks belong to the Central Asian ethnic groups with bold Mongoloid features. Earlier they led semi-nomadic life, practiced agriculture, cattle breeding and fishing. For the most part they lived in yurtas (nomadic temporary houses). In spite of the fact that today the native customs are being kept only by the old generation, the signs of ancient traditions can be traced in the house interiors, clothing, food, peculiar applied art.

Nukus, the capital of Karakalpakstan, is a beautiful modern town, the center of economic and cultural life of the republic. Everyone who is visiting Nukus should certainly see Karakalpakistan State Museum of Art named after its founder, the famous artist Igor Savitskiy. The museum displays not only works of painters but also a wide variety of local artifacts found in the region, which attest to continuity of cultures.

Karakalpakistan truly proves to be a vivid example of times correlation. Beautiful and tempting, promising surprising meetings and discoveries, it is ready to impart its mysteries and share its legends.

Uzbeksitan today is the country where thousands-old antiquity exists in harmony with modern civilization. Harmonious correlation of times is seen everywhere. Ancient monuments, Old Town houses made of adobe bricks stand next to many-storied sky scraping buildings constructed in accordance with the unique designs worked out by architects of the 20th century. The traditions of the people are being carefully preserved.

Arts and crafts have been developing here throughout the centuries; their secrets have been passed from generation to generation as great treasure. The unique works of unknown masters strike you dumb by the flight of fancy. In the present-day Uzbekistan traditional cultural values are being treated with great care, the state supports revival of the arts and crafts, contributing to their further development. Uzbek ceramics, embossing, wood carving, golden embroidery, carpets, varnished miniature, jewelry are well known far outside our country.

In the present-day Uzbekistan a lot is being done so as to restore the unique monuments - witnesses of the country's past; owing to these programmes of restoration and preservation work many of these monuments have been given second birth. Marco Polo Central Asia Travel, one of the leading tourist companies of Uzbekistan acknowledged worldwide, provides travelers with the opportunity of visiting these places and touching the pulse of history.