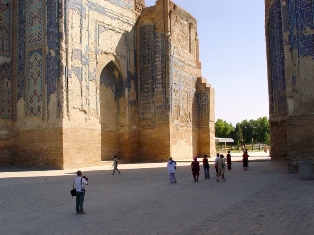 Shakhrisabz - hometown of Temur where everything somehow or other connected with his name. Here the lord was born and grew up, here his father Amir Taragai and spiritual advisor Shamseddin Kulyol as well as his eldest sons Jakhongir and Omar Sheikh were buried. And the great lord himself believed that here his soul would rise to the throne of Allakh. He even constructed the crypt for himself. But the destiny made arrangements in different way...Temur was born in 1336 and showed his exceptional skills while being quite young. When he was twenty five years old, he was already the governor of Kesh, as Shakhrisabz was called at that time. They say, that once upon a time Теmur looked how ant was creeping on a stem of a blade. Ant was sliding, falling down, but continued emphaticaly climbing up. And ultimatly reached the top. And young man had thought: if ant could succeed why I can not? And he had succeeded in all his deals. He defeated and captured the Turkish sultan Bayazed, had beaten the Holden Horde. He made triumphant campaigns to Iran and Caucasus, India and Asia Minor.Having created the vast state of Movarounnahr and having become an absolute emir,Temur had made Samarkand as his capital.But he always remembered and paid all his possible attention to his small hometown. 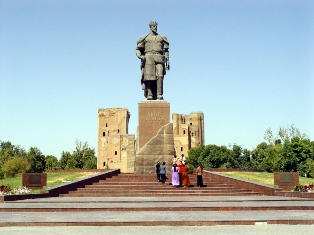 In essence, Shakhrisabz was the second capital of his empire. The descendant of Temur, the founder of the Great Moguls dynasty Bobur wrote: "Since Kesh was Temur's bithplace, he made a fantastic job to make a city " pedestal of throne ".The best architects, builders, masters of architectural decor together with the local masters erected majestic buildings embodying thus the experience and traditions of various countries. Their creativity had given magnificent results due to unification of knowledge, experience of traditions and creative efforts put in pawn fundamentals of monumental style which determined architectural features of Central Asia of the end ХIV-ХV centuries.Ak-Saray Palace is an example of the main governmental building - residence.Construction of the palace started in 1380, but even in 1404 were not completed yet. 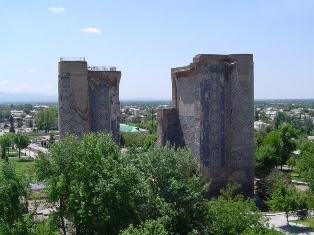 The lancet arch of this magnificent building had a span of more than 22 meters - the biggest among all Timur's construction. The entire covering of magnificent glazed tiles dressed its surface, the blue of mosaics and majolica reigned everywhere, where in infinite variety conventionalized ornaments and intricate ligature of inscriptions displayed itself.

Ancient Shakhrisabz arose at the bottom of Zarafshan range, in the valley of Kashkadarya river. In course of centuries, the city had to experience both happy and drama destiny, but it was always full of events.

Occasionally, the city fell into decay, but every time time under various names - Gava, Sugda, Nautaka, Kesh, Shakhrisabz rose again. And it was the same city, as the historical eligibility was preserved.Here in IV century B.C. the troops of Alexander the Great rested for a while, these places witnessed how Bactrian satrap Bess was captured,who killed Darius III and who proclaimed hismelf as

"the king of Asia". In VII century the city was besieged by the Arabs, and one century later Kesh became the centre of the strong anti-Arabian uprising led by Mukana. When there was no war, the city safely grew up and developed, since its location on the Great Silk Road was perfect.The medieval author Makhmud ibn Vali wrote: "Kesh- of all the cities of Movarounnahr … is Consider as one of the most beautiful places of the world with an attractive climate. Fileds and open spaces are very beautiful and desired". We have to agree with the estemeed author. Especially because, at present Shakhrisabz quite justifies its name - "Green city ".